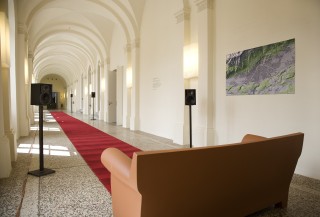 24 sound images in the duration of 30-45 seconds – compiled from a series of recordings of Innsbruck’s
sound sphere (2005-2007) are the material of the installation. Three pairs of loudspeakers divide the long
„sound space“ into beginning, middle and end. Only one pair of loudspeakers sounds at a time. Each sound
image, following the direction of space, is repeated twice.

Sounds penetrate the room from both directions. Each room has its own sound due to its size,
architectural form and the materials used. All sounds are „colored“ by the installation space.

The compositional structure of the work depicts each sound image in its second repetition in the near field.
In the 1st and 2nd ap play position, the more distant, the space itself comes into play. Only in the near field the
Space sound „masked“ by the sound image.

From the interplay of the sound material of the installation, the sound events inside and outside the museum,
as well as the colouring of these through space, presuming, recognising, thinking and musical hearing can arise.
This hearing needs time.

Studio simulation of the basic idea with digital reverbs