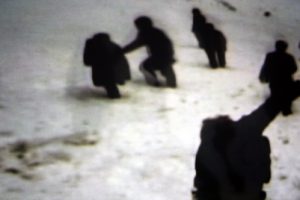 the video shows a large field covered with snow. a large group of figures, faceless and in shilhouette, cross the field.
this crowd moves across the space in a strange choreography of shifting speeds and patterns. some run, some fall,
some freeze in space, some move at double speed and some begin to move backwards.each figure seems to exist in
his own time. three performers crossing the field were recorded to make this video.these recordings were then layered
over each other to create the large groups. by manipulating the time structureof each individual layer – accelerating,
decelerating, freezing, reversing, a complicated composite scene could be made with as many twenty figures all moving
at different speeds but at the same time.

the source material of the music comes from complex sounds of a prepared piano. over a period of one  year i  prepared
a piano in my studio in berlin. each day i came into the studio, i put different coins between the strings and started to
play with these sounds. for perfect speed i used the following piano sounds as structural matrial:single notes, chords,
clusters, short rhythmic and melodic patterns. this material had been sampled and its original time and pitch structure,
has been altered.the final composition is made from layers of these sounds and low frequency sinus waves, which are spread
in the room by a five channel sound system to produce the continuity as a kind of sonic-spatial conversation.

perfect speed uses a simple low tech device to create real time interaction between the sound and the video.a black drumskinn
filled with water is placed on a sub-woofer. a video monitor playing „perfect speed“ is placed by the drumskin and the image
from the monitor is reflected in the water. the low sinus tones in the music, debending on their frequency cause the water
in the drumskin to vibrate in various patterns.these vibrations distort the video reflection in direct physical reaction to the
sound.the reflected video is re-shot and projected.

the re-shot video is projected onto one wall.separating the viewer from the video is a specially placed black frame, which
functions like a giant pass-parout and keeps the viewer from seeing the edges of the video. by viewing though the frame,
which is a few meters from the projection surface, the viedeo appears to float in the space between the frame and
the wall. in the viewing area itself the video monitor/reflecting pool/sub woofer/camera set up can be seen. An undistorted
version of perfect speed is projected on the wall opposite the frame and the re-shot projection.