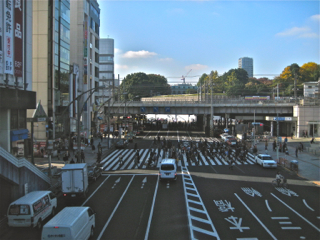 “ The basic musical experience is the absence of music.“ John Cage

The music of the Bosavi is a representation of their sonic environment. While here there is an
interrelation between music and a natural sound environment, such an interrelation might also exist
for musical forms of expression which have their origin in the urban environment.
In the beginning of the 20th century the Italian Futurists expanded musical material by integrating
the sounds of the city in music and thereby blurring the lines of distinction between tone, noise,
music and silence.

Music styles like Jazz, Punk, Noise, Industrial or Techno are in many ways closely related to the
urban space – their aesthetic principals correspond to the sonic characteristics of the urban
environment.

Such sonic characteristics can be found in all big cities and are produced by traffic, machines,
media, crowds of people, etc.

But every city also has it`s unique soundscape which is generated by culture, architecture,
topography or climate – and this soundscape shapes the behavior, sense, thinking, listening habits
and perception patterns of the city’s inhabitants. Perhaps the typical sound of New York in the 50’s
had an influence on the development of Jazz; or the urban sound of Tokyo, with it`s ubiquitous
electronic sounds, had an influence on the development of Japan Noise Music.
This idea is the starting point of the composition private city.

The sound material of the piece private city

The composition is divided in 3 parts

1.(A)+(B) combined
The audio track of Toshimaru Nakamura in the studio recording (A) is extracted, combined with field
recordings from Tokyo (B) and thereby placed in a new musical context. Now it is possible to hear
similar sonic, rhythmic or atmospheric characteristics of the two recordings.

2.(A)+(C) combined
The same procedure is applied to the audio track of Hannes Strobl (A) and field recordings from
Berlin (C)

3. (A) original recording
We hear a piece of the original studio recording (A) by the two musicians without the added sound
material from Tokyo and Berlin. Now musical structures, rhythmic patterns, sound-textures and
dynamic sequences refer to a level outside the music, and the sonic characteristics of the two cities
remain audible.