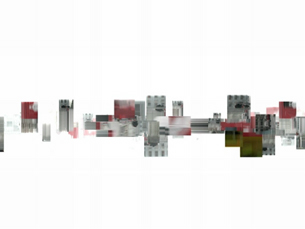 Architecture forms all sounds we hear. Urban architecture is a sound box, it shapes a space, wherein the range of sounds which surround us is resounded and reflected. In the video „Stadtmusik“, the Linz-based media artist Dietmar Offenhuber and the Berlin formation TamTam (Sam Auinger / Hannes Strobl) deal with sound in cities, by analysing sound structures which are triggered by urban buildings and facilities. They focus on the aspect of movement in the city, which reinforces a dynamic experience of the urban soundscape: particular sounds emerge through movement, sound and its timbre evolves from material and space.

The film- and media theorist Vrääth Öhner focuses on the relation of movement and perception. Dietmar Offenhuber analyses this relation by using urban contexts as example: „Perceiving perception: Through media, this is simultaneously possible and impossible. The important thing about moving images is what is moving rather than what is causing the movement. But the fact sometimes tends to be forgotten that the animated image could not exist without the viewer’s illusionary assumption that he or she is not seeing individual frames but continuous motion. As a result, it should not surprise when film or videographic experiments are at their core reflections on forms of perception conveyed through various media, their purpose to make accessible the circumstances under which sensuous experience takes place, which are dictated by the media.

This all applies to the videos of Dietmar Offenhuber, though the problem is made more complex by the reference to perception which itself requires the use of technical apparatus. It´s subject is not „natural“ perception, but perception put in motion and therefore implicitly the history of an epochal transformation of the way in which time and space is experienced. It has come to a preliminary end in suitable contexts where moving perception now seems to be regarded as integral to natural perception. The thesis presented in this regard would therefore be that the specifically aesthetic quality of such animated perception is absent from the forms of audiovisual representation which are already considered natural (such as indicating movement by means of a tracking shot): In its fragmentation of the continuum of perception, the „subjective geometry which defines space through intervals of time“ (Dietmar Offenhuber) illustrates a manner of experience which could remain submerged because it is already so familiar.“

Since June 2004, the series  Medienturm SHOWS runs at the Ovalhalle of the Quartier 21 / MQ Wien on  Sundays. Experimental artist’s videos are on show, discussing the manifold  relation of image and sound in the field of contemporary media/art. In the frame of openings, audio-visual live-acts and comprehensive statements of  invited media theorists are presented. In addition, each work is published in  a limited DVD-edition.
from the catalogue medienturm, graz