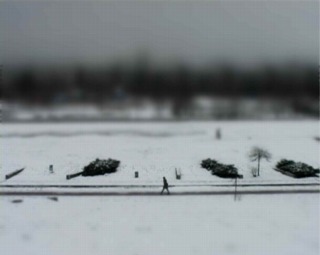 the winter landscape of mauerpark in berlin turns into a theatrical stage, populated by pedestrians and cyclists following various, sometimes mysterious activities.
what seems like a slice of daily life, is in fact heavily digitally manipulated. the soundtrack creates a second space, sometimes contradicting the visual events in the picture. the travelling focus directs the visual attention and is controlled by subtle acoustic ambience. its unnatural strength has a miniaturizing effect on the whole scenery.

architecture forms all sounds we hear. urban architecture is a sound box, it shapes a space, wherein the range of sounds which surround us is resounded and reflected. stadtmusik deals with sound in cities, by analysing sound structures which are triggered by urban buildings and facilities. they focus on the aspect of movement in the city, which reinforces a dynamic experience of the urban soundscape: particular sounds emerge through movement, sound and its timbre evolves from material and space.